Creating a toy wasn't something that was completely on my radar a few years ago. I loved the look of so many toys, but just like before I became an animator, it's not something I considered doing right away.

Fast forward to NYCC 2010 (my first comicon). I was still relatively new to living near New York, so I decided to check it out. I came across so many amazing artists and it finally dawned on me. "Holy crap, people actually MAKE these things!" To keep a very long story short, I didn't dig much deeper, and my inspirado eventually fell to the back burner.

Work and life took over. 2 Films & 2 Kids later, I found myself wondering how people go about making these things. I had started poking around a bit and as I looked into it more and more, interest reared its head and it became something I REALLY wanted to do. It would be amazing to have something from my imagination sitting in my hands.

In animation (and many creative fields), toys litter the desks of the artists. They serve not only as decoration, but inspiration for so many of us.

While sitting at my desk during one of my playblasts (when you render you animation for preview), I started sketching. Using primitive shapes, I wanted to see what kind of forms would come out of it. After a minute or two I had a very rough sketch that I thought was pretty cool. 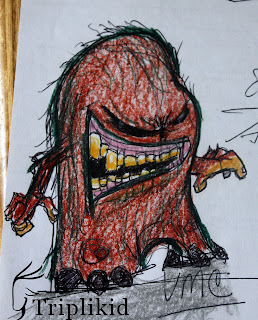 It was a quick sketch that I didn't give very much thought to initially, but decided to do one a day for the rest of the week. *Note - I will not be including the second sketch, since I've since dropped him from any plans I have of making it into the series.

Over the rest of the week, I did one a day, and here are the other 3 that I thought had some promise. 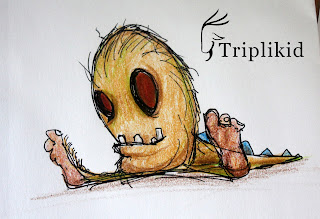 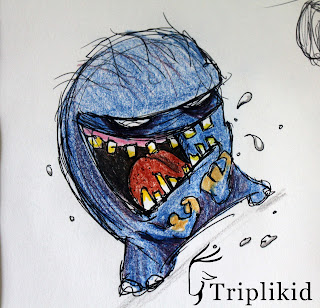 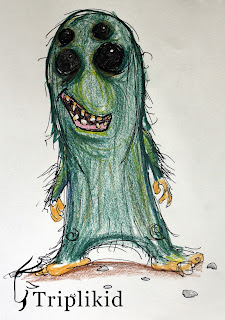 Someone, at some point suggested making them into a toy series. Great!  I finally had my subject right in front of me! I knew someone who had gone through the process, so I decided to see how it went for him. He gave me his story, and the ups and downs of dealing with a company in China. His sculpt came out very good, but I wasn't sure that was the direction I wanted to go. Many of those companies require you to order 1000, and I wasn't ready to take that leap just yet.

I came across a small company in California, and after emailing an inquiry, and making a few phone calls, I was starting to get the ball rolling on the project. They were very informative, helpful, I could do a short run, and wouldn't it completely break the bank.

I chose the Blue guy because I liked the simplicity of his form (and I'm sure you've seen other creatures like it), and his overall attitude.

We decided to take the plunge and kick the project off. As of this post we're 2-3 weeks from seeing a final painted proof and interest in the project has been great!

So if I can sell my first run of 40 out, I'll be able to take the next step and make another one of these guys. I'm torn between green and yellow, but I am leaning towards the green. I love the look of glassy black eyes, and the height contrast will look great against the shorter Blue (Groper).